Bees swarm naturally from robust colonies that have become overcrowded. Catching a swarm to start your own new hive is exciting. Be close up to mother nature working her wonders - catch a swarm this spring.

When Spring is upon us, so is the swarming season. Swarming is part of the natural reproductive life cycle of honey bees and is caused by the warmer weather, combined with an abundance of nectar and pollen. These two factors stimulate the colony to increase in population resulting in overcrowding which prompts some bees to swarm so that they can reproduce.

Swarms usually emerge from the colonies between mid morning to mid afternoon on warm sunny days. The old queen, together with about half of the bees from the colony, leave the hive and cluster on a nearby object such as a fence or a small shrub. There the swarm may remain for a few hours or 1-2 days while scout bees (worker bees) search for a more permanent nesting site.

Once a permanent site is found, the swarm will move to this site and establish a new colony.

Bee swarms are not normally aggressive because they are gorged full of honey and are homeless, which reduces their defensive behaviour.

However, a swarm will become increasingly defensive the longer it needs to remain in a given location, and the more they are provoked. Back in the original colony, a new queen emerges and continues to maintain the parent colony.

The key in catching swarms of honey bees is convincing all the clustered bees that they should remain in the container you have put them in.

What is the difference between a swarm and a nest?

Pictured below is a swarm of bees in a hedge in Surry Hills. Together with their queen, they have left their nest or colony and clustered in this hedge while the scouts search for a location to build the new colony or nest. 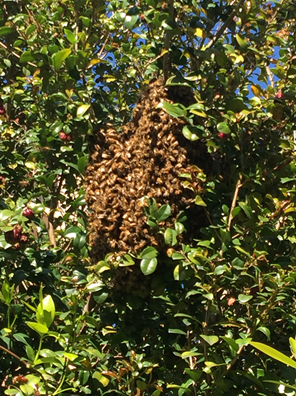 Pictured below is an established nest or colony under the canopy of a dense tree in Marrickville. The bees are building comb, storing nectar and pollen and the queen has commenced laying.

To be 'swarm ready', it helps if you have a pre-prepared kit, as at times you think you have been called to remove a swarm only to arrive and realise it is actually a nest. It pays to ask a lot of questions beforehand and ask the caller if it is possible for them to send through a picture.

What to take with you

The following items are suggestions to include in your swarm kit.

Being organised and having a stocked swarm kit on hand ensures you are always prepared.

In the picture below the swarm was dealt with by carefully pruning around the branches and simply dropping them into the plastic container. Several frames were removed and the container tipped upside down into the hive box.

The picture below indicates that we have captured the queen as the left over bees (some that don’t make the drop) are happy to make their way inside on their own. Leave them for a while, or scoop them up and place inside the hive box until all or most are done.

Make sure your site is ready to bring your new hive to home.

Information and knowledge sharing thanks to Gary in the ABA Parramatta Newsletter (October 2014), Milkwood (www.milkwood.net) and Gavin Smith

Join a community of like-minded people who want to do great things together.

Become a member of Gather By

Sign up as a member to get access to more sustainability resources and become a VIP member with 10% off every purchase.